REPARATIONS – An urgent requirement for Humanity

An urgent requirement for Humanity

The French version of this book  » RÉPARATIONS – Une exigence urgente pour l’Humanité  » is for sale on the site (To obtain this presentation in French or another language, click on the LANGUAGES button that appears on the page)

The need for reparation becomes urgent at a time when the issue has become a media issue and those who oppose it, having understood that such an issue can no longer be ignored, have decided to muddy the waters.

Many organizations have opened their own workcamps, but for them, reparation rhymes only with reconciliation, and excludes any financial compensation in line with the position of the French state, which only means a reparation of memory that it does not assume elsewhere. the question of the two crimes would therefore be a simple moral question. These negationists and ideologues in the service of the state will increasingly occupy the media field and the fight initiated by MIR and many others must now be raised, intensified and federated at the international level.

This is why, in partnership with DIASPORAS NOIRES EDITIONS, it seemed important to MIR to coordinate and produce this international collective work, reflecting as many voices as possible, exploring all the known paths on the theme of reparation, and above all a pedagogical work dealing with all the forms it takes: cultural, psychological, spiritual, economic, political reparation… 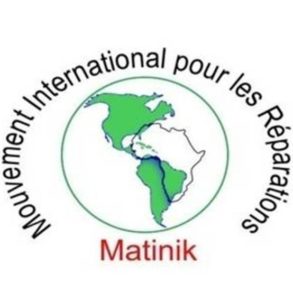 (classified by order of appearance of their written contributions) :

Lawyer and Vice-President of MIR

Lawyer and member of MIR

Specialist of the European Negro Trafficking

Colombian, Author of several books on the slave trade, slavery and colonial domination.

Professor of Political Philosophy, specialist in the practices of the Roman Inquisition and the codification of black slavery

Lawyer – Member of the ICNP International Committee of Black People

University of the West Indies

Translated from French by Joséphine Ndiaye